Over Christmas I visited Hampton Court Palace, in the middle of their annual Christmas festivities. Jesters strolled the courtyards, and re-enactors scuttled around the cavernous kitchen, distilling rose water as if by magic and turning spits, perched next to roaring fires. In a corner of the kitchen, one man was making elaborate sweets and decorations from sugar, and was surrounded by gold-leafed sugar crowns and wooden marzipan moulds. As we stood to listen however, it soon emerged that he had deviated from the script, and was using his position as an unlikely springboard to spread his heartfelt but jolly anti-monarchist views to the young children gathered around. “I’m the biggest republican you’ll find!”, he confided to them. “You see, deep down kids, nothing’s changed – the Queen still basically owns everything. Your parents think they own their house, your garden, but no, the Queen still owns everything in the country. Start a revolution!”. His speech over, for one silent moment he searched the children’s eyes, hoping presumably to see the glimmer of fires lit in their hearts. “So all of this stuff is sweets?”, gasped one of the wide-eyed boys in the crowd.

Hampton Court is such a treat because it’s two palaces for the price of one: the redbrick Tudor palace, an earthy, human-feeling place designed for feasting and the sensual pleasures of a highly social court, and William III’s seventeenth-century baroque palace, a sort of Versailles-on-Thames. This latter part of the palace feels very different. Chilly, formal and withheld, it embodies a changed style and purpose for royalty, more familiar to today’s visitor. This part of the palace, however, has stories to reveal of royal families so dysfunctional they make our own look like the Waltons.

It was the well done audioguide for the palace which introduced me to the figure of Frederick, Prince of Wales, who despite his enigmatically sad life story barely registers as a blip on the historical radar, except as father to George III and great-grandfather to Victoria. 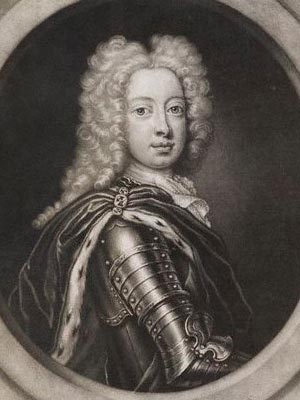 Born in 1707, Frederick was the eldest son of George II (the last British King to be born outside of Britain), and Caroline of Brandenburg-Ansbach. The relationship between Frederick and his parents seems never to have been happy, and in time would be animated by a bitter, festering hatred. This hatred can be traced, dissected and placed in context, but at three hundred years’ distance remains hard to fully understand emotionally.

It is fair to say that father-son relations between George II and his father George I were no picnic either. The most important reason for this seems to have been George I’s treatment of his wife, Princess Sophie Dorothea, George II’s mother. Though by no means the most natural or devoted of mothers, she certainly held a place far deeper in her children’s hearts than the cold, controlling George I. The marriage broke down when Sophie Dorothea turned to another man to meet the many needs left unfulfilled by George I. On learning of this affair, George I, despite his own frequent infidelities (some of which produced children), divorced Sophie Dorothea, and, rumour had it, had her lover murdered. Sophie Dorothea was banished to the castle of Ahlden, and forbidden from ever seeing her children again. Myths abound of a young George II making desperate attempts to breach the castle to see his mother, even trying to swim the moat that surrounded it, but to no avail.

This poisonous example cast ominous shadows over George II’s relationship with his oldest son Frederick. Their problems appear to have taken root in the divided responsibilities of the House of Hanover, whose rulers had, since George I was crowned in 1714, served as both Kings of Great Britain and Electors of Hanover. Having been born in Hanover, Frederick’s father, George II, was summoned to Britain by George I when Frederick was just seven. It was decided by George I that Frederick should not accompany his parents, but instead remain behind in Hanover, so as to maintain his bonds with his ancestral home (still, perhaps, where the heart George I truly lay) and to provide a figurehead for their Hanoverian subjects to look to. Here perhaps was the first bone of contention between Frederick and his father. Whilst George II struggled, like many before and after him, to find a useful, satisfying role as Prince of Wales (opposing his father whenever he could), Frederick was nurtured and encouraged by George I as the representative of the House of Hanover at home, taking a place at the centre of court ceremonial. Indeed, George I ignored Princess Caroline’s pleas to be reunited with her son, and insisted that he could not come to England.

Consequently, Frederick did not see his parents for 14 years, and led what seems to have been a lonely childhood. His education, free from paternal interference, began to take on a far more liberal and artistic bent than his parents would ever have approved of. By his early adolescence he had already developed the pronounced tastes for drinking, gambling, women and petty destructiveness that are to be expected from privileged, idle young men, unchecked by any authority figure.

During the 14 years of separation, the family of George II and Caroline expanded, with 7 more children born after Frederick. Absent during its formative years, Frederick seems always to have remained a stranger to this family, and his younger brother William, lauded for his bravery and manly, military pursuits, emerged as the clear favourite of Frederick’s parents and his sisters.

By the time Frederick arrived in England in 1727, following his grandfather’s death and his father’s accession, deep seams of resentment and division had clearly already been sown. Despite Frederick’s frustration at his parents’ delay in summoning him to join them, initially both sides seemed keen to maintain at least a semblance of amicable relations, and several observers commented that Frederick was especially polite and respectful towards his parents. This was not to last.

During this time the position of Prince of Wales had become a magnet for anyone with a grievance against the king, and a centre of opposition. At first, Frederick’s activities were confined more to cultural than political affairs. This did not make them necessarily any the less offensive to George II, a man with notoriously little time for books and a natural aversion to artistic endeavour. Frederick founded the Opera of Nobility in London, to directly rival the Second Royal Academy of Music, presided over by Handel and supported by the King and Queen. Frederick also patronised many of the most important artists of contemporary English Rococo. Frederick even wrote a play himself, under the pseudonym of Captain Bodkin, which was by all accounts so dire that it threatened to cause a riot when it was staged at Drury Lane (though riots were all part of the fun of eighteenth-century theatre-going). One member of the audience was moved to stand and declaim that ‘the highest power on earth could not force the free-born subjects of England to approve of nonsense’. The play ran for just two performances, though this was at least one more than the beleagured theatre manager had expected. One of Frederick’s more lasting legacies was commissioning James Thomson, a playwright and poet who wrote the words to Rule Britannia (later set to music by Thomas Arne), which has become an unofficial national anthem of Britain.

All of this served only to enrage his parents, who deplored his degenerate, extravagant lifestyle (including his habit of running up large debts) and refused to grant him the funds to which Frederick felt he was entitled. It is said that George II examined ways to remove Frederick from the succession, and even considered dispatching him to the colonies.

As the relationship deteriorates, it becomes harder and harder to discern who was responsible for each new offensive, or their reasons, but there was certainly much vitriol on both sides. Frederick offered sponsorship to a clutch of opposition politicians, and the King and Queen all but exiled him from court and any useful role. A low point seems to have come in 1737, by which time Frederick was openly ignored by his father, and not on speaking terms with his mother. Frederick’s wife, Augusta of Saxe-Gotha, was pregnant with their first child. His parents, who questioned Frederick’s ability to father a healthy child, were suspicious and insisted that he and his wife remain at Hampton Court Palace for the birth, so that they could witness it (and perhaps prevent any other baby being substituted if Frederick’s child died). However, when Augusta went into labour during the night, Frederick had her spirited out of the palace, and they escaped to the privacy of St James’s Palace. There have been dark rumours since that Frederick and his wife feared the King and Queen might seek to murder their child, which, however implausible, are at least reflective of the truly rotten state of the relationship.

The King and Queen were furious, the Queen sending Frederick a message informing him that ‘Your Royal Highness deserves to be hanged’. When the Queen became seriously ill shortly afterwards, George II would not allow Frederick to see her. When death followed, he did not attend her funeral.

There would be no lasting reconciliation between Frederick and his father, and each continued to try in every way they could to limit each other’s power right up until Frederick’s death in 1751 (some said from being struck by a cricket ball, but more reliable sources attribute it to pneumonia). Frederick was said to take to family life well, abandoning the womanising ways of his youth and living a seemingly contented family life at Cliveden House in Buckinghamshire. George II only seemed to soften once Frederick was dead, doting on his widow, and demonstrating such an excess of grief that some took it to be affected. Perhaps it was. But perhaps only now was George free from the profound sense of duty, propriety and responsibility which seemed to bind the hearts of the Hanoverians. Perhaps only now was he able to stop holding Frederick to impossibly high standards, and mourn a son he had never been allowed to know.

What is most saddening about the story of Frederick and his family is all the missed opportunities, the lost chances to break the patterns of coldness, mistrust and hatred already established by George II and his father. George II and Frederick failed to see how George I had played them against each other, and sacrificed their chances for family happiness. As it was, they went on playing George I’s game for him, long after his death might have ended it. This was a game that would continued to be played by Kings and Princes in the years to come, in particular in the case of George III and George IV.

So perhaps more is revealed by the sad story of Frederick than his invisible place in history suggests, and it’s time to question the verdict of one contemporary who, struggling to think of anything to say as an epitaph to Frederick, could only come up with

‘Here lies Fred,
Who was alive and is dead’.